Central Otago is a land of extremes: extreme geological formations and an extreme climate. From blisteringly hot summers to bitterly cold winters, the region has it all. The change in seasons is one of the many things that keeps the region interesting for Tom Butler, General Manager of Blanket Bay Lodge.

“We get four distinctive seasons,” he says.

“Summer can be stifling hot and dry and you get that quite arid look, springs are usually beautifully calm and it’s a stunning part of year with everything in bloom, winter is crisp with snow all about, and Central Otago, as far as New Zealand goes, has one of the prettiest autumns. We get so many shades of yellows and golds.  It’s quite spectacular, and all the seasons are quite unique.” 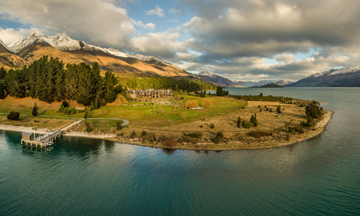 Just like Swanndri, Blanket Bay has wool in its DNA. The bay has unique geographical terraces carved out by glaciers and it’s on these terraces that men would hand-shear all the surrounding valley’s sheep every spring.

“The shepherds would bring all the sheep down to these terraces and the shearers, all of whom were Māori, would live in the bay here, shearing for the whole valley for a couple of months. They would live under blankets — they basically made blanket huts — and so it just got coined Blanket Bay,” Tom says.

This was long before the bay was connected by road, so steamships and row boats would come directly into the bay’s deep waters to take the wool away to Queenstown. These days though, Tom says guests can choose between a short 40-minute drive or a scenic boat ride to get to New Zealand’s adventure capital.

“It used to be seen as somewhat of a disadvantage being just out of Queenstown and that’s been really turned on its head now. Being 40 minutes up the road is now a real positive. Guests can easily go into town for the day if they want and then come back to the peace and serenity of the lodge.”

“The location, being just on the end of Lake Wakatipu, is simply outstanding. You’ve got Mount Aspiring National Park just up the valley, and you’ve got Fiordland just over the hill as well. The location is second-to-none.”

The lodge was built by American businessman Tom Tusher and his wife, Pauline, in 1999, at the turn of the millennium. Tusher, the ex-CEO and president of Levi Strauss, had fallen in love with the region — and the fishing it offered — years earlier.

He bought the land at Blanket Bay in the 70s but sat on it for decades before building anything. The 20+ year wait was worth it, though, as the original plan of building a simple fishing hut evolved into the stunning luxury lodge that exists today.

“The lodge is built with a few thousand tonnes of local stone, big square timbers from the old steamers wharf in Queenstown and the old Brisbane wharf, and then Welsh slate on top of that,” Tom says.

“It’s incredibly unique with big sweeping lawns which go right down to the lake — usually in Queenstown there’s a road between the properties and the lake.” 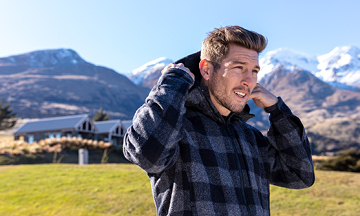 Tom was excited when Swanndri called to tell him we wanted to shoot the season’s campaign at the bay. Of course, it came as no surprise given that Swanndri has been synonymous with rural New Zealand for more than 100 years.

“Being a Kiwi boy, and having lived on a farm for the best part of 25 years, there’s always been a Swanni in the shed and still is to this day,” Tom says.

“I’ve actually still got one from my old man who was a deer culler all those years back. It’s still going strong despite a couple of wee holes in it that I’ve had to patch up.”

Just like Tom’s father’s jacket, the Swanndri Winter 2020 collection is designed to go the distance, and keep you warm and dry through the most brutal of conditions. So, unlike the hardy men who inspired the Blanket Bay name, you don’t have to rely on blankets to stay warm this winter.