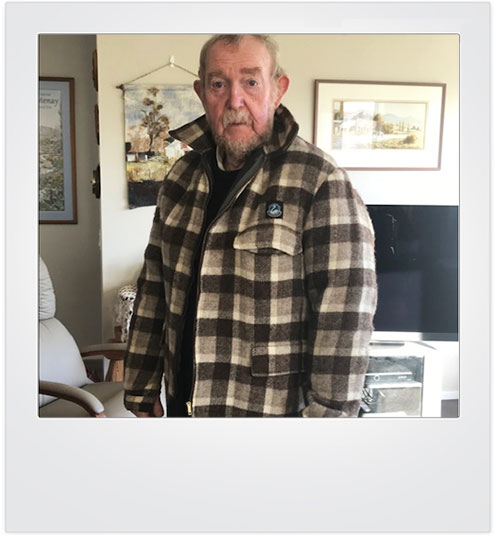 When Ken Swainson first started farming back in 1964, the Young Farmers Association set him up with an essential piece of farming kit: a Swanndri.

Today, almost 60 years on, Ken’s still got that Swanndri – and he still wears it proudly. But it’s more than just a piece of clothing for him now. It’s a symbol of all the things he’s done and seen over the years. And Ken has certainly seen a few things.

Brought up on the outskirts of Feilding, Ken started sheep and beef farming straight out of school. In those early days, his Swanndri went with him everywhere.

“I used it farming and hunting. But also things like stock judging and fencing competitions. It went to England with me on my OE. And also on town days or to the sales.

”It’s about versatility, as well as durability and comfort. As Ken says “It’s a hell of a heavy duty jacket. But it’s also very presentable.”

Over the years, Ken clearly became a bit of a leader in the farming industry. He was Chairman of the Feilding branch of the Young Farmers Association, and then district Secretary for Erua Young Farmers for about 20 years.

Then in about 1985, he suffered a badly broken leg. This made doing things like dagging sheep a little difficult, so he decided to give deer farming a shot instead. As it turned out, Ken was to become a bit of a pioneer in that industry, too.

He ended up with 2,500 fallow deer on over 300 acres near Palmerston North. Initially farmed solely for venison, he developed good bloodlines over time, and so eventually got into the trophy hunting business as well.

As if he didn’t have enough to do, he started Kahui Deer Transport at the same time, shipping deer all across the North Island. Oh, and also he stood as President of the New Zealand Fallow Deer Society for a few years.

Ken admits his hunting hobby took a bit of a back seat when he started deer farming. But he’s not regretful – in fact he’s “tickled pink”, because his grandson is starting to show a bit of interest in hunting himself.

“In the next couple of years, hopefully I’ll be able to take my grandson out, and he can wear his great-grandfather’s Swanndri while we’re hunting.”

His great grandfather’s Swanndri? We ask Ken to clarify. Ken explains that his father had an original blue check Swanndri, which has been passed down to his great-grandson. That’s 3 generations worth!

We asked Ken if that’s part of the reason why he’s kept his Swanndri for so long. He admits that he’s hung onto it for sentimental reasons, of course, but also because it’s still useful. He’s looked after it and he still wears it.

Cheers, Ken. As we thank him for taking the time to talk to us, he replies, “My pleasure. I like helping those that have helped me, and the old Swanndri certainly has.”