Just a short drive from Christchurch is the stunning public reserve at Godley Head: the backdrop of our Summer 2021 season photoshoot. It’s here, surrounded by golden tussock-laden hills and sweeping views of the Pacific Ocean, that the little-known Uncle Bill’s Cabin — commonly known as Scott’s Cabin — perches on the hillside. It couldn’t be in a more alien environment than the ice world of Antarctica it was designed for, and the story of how it got here is as fascinating as the great polar explorers who were once destined to live in it. 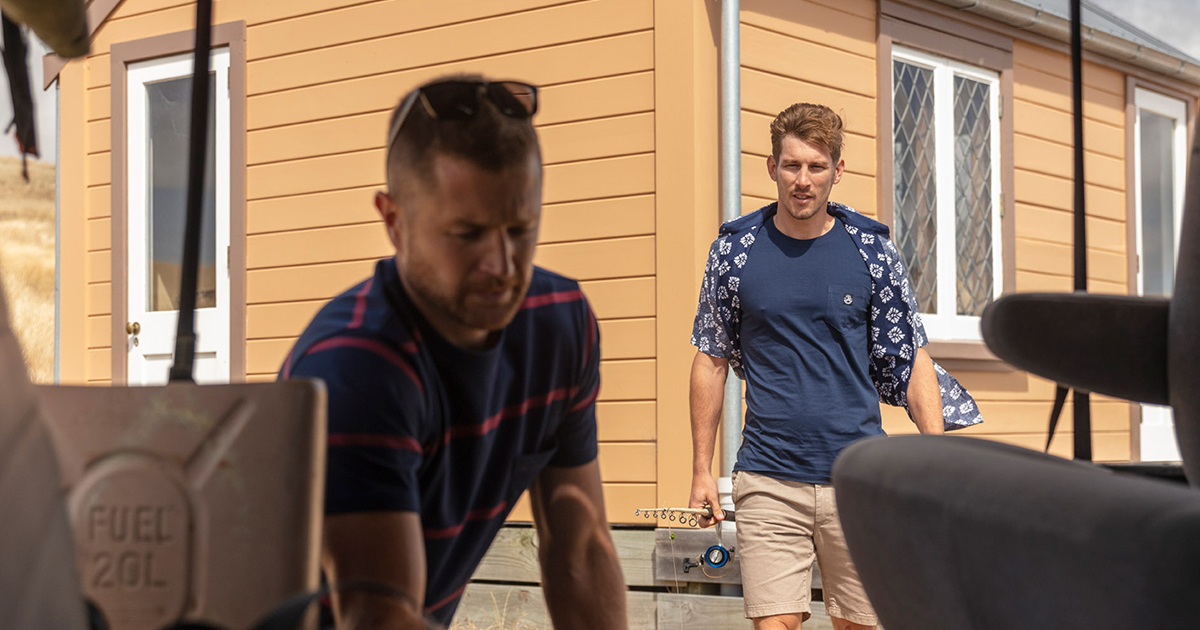 The modest 3m by 4m dwelling overlooks the city, sea, and mountainous views of Canterbury. What it lacks in size, it makes up in rich history: this little cabin on the hill has seen many corners of the world when it once had lofty Antarctic ambitions, before eventually being brought to reside near the WWII coastal defence site in February 2013. The historic building was one of four huts prefabricated in Norwich, England, for the 1910-1913 British Antarctic expedition, led by Robert Falcon Scott — hence the nickname “Scott’s Cabin”. The cabin was unique with its rooftop observation platform, designed especially to facilitate meteorological observation and research. The expedition – while hugely successful for research in meteorology, magnetism, glaciology, geology, geophysics, marine biology and cartography – was, however, infamously ill-fated, with the devastating deaths of five leading explorers. Their objective to make Britain the first nation to conquer the South Pole was also, disappointingly, a failure. Scott and four of his companions – including the highly respected scientist, Dr. Edward Wilson (nicknamed Bill), who the cabin is officially named after – died from exhaustion, starvation and hypothermia on their blizzardy return trek from the South Pole. Norwegian explorers, led by Roald Amundsen, became the first people in the world to reach the southernmost point of the globe thirty-four days earlier.

As for the fate of Uncle Bill’s Cabin – after being shipped all the way to Antarctica on the Terra Nova in 1911, it was never unloaded, instead returning to Lyttleton in 1912 unused and still in its wrapping. The prefab was then transported, section by section, up to the Kinsey Tce property overlooking Christchurch of Joseph Kinsey, a dear friend of Scott’s and a critical playmaker for the early 1900s Antarctic expeditions. It was at Kinsey’s home that Scott had spent his final days in New Zealand with his wife, Kathleen. For many years, Kinsey’s Clifton Hill property was a social hub for those involved in the Antarctic scene, and the cabin – when not hosting copious guests – was used by Kinsey as his smoking room, embellished with all kinds of polar memorabilia, including framed photographs and Scott’s cabin chair from the Terra Nova ship. At one point, the hut even served as the home of Kinsey’s gardener and of Demetri Gerof, an Antarctic dog sled driver. Many decades later, in 1974, the Sumner cliff-top property was subdivided and sold. David and Valerie Crichton bought the section with the cabin included for $22,000, and what was once Uncle Bill’s Cabin became David’s study. When the Canterbury earthquakes started to hit, the cabin became a refuge for the Crichtons who trusted the centuries-old timber frame more than their modern house, which eventually fell to the February 2011 quake. 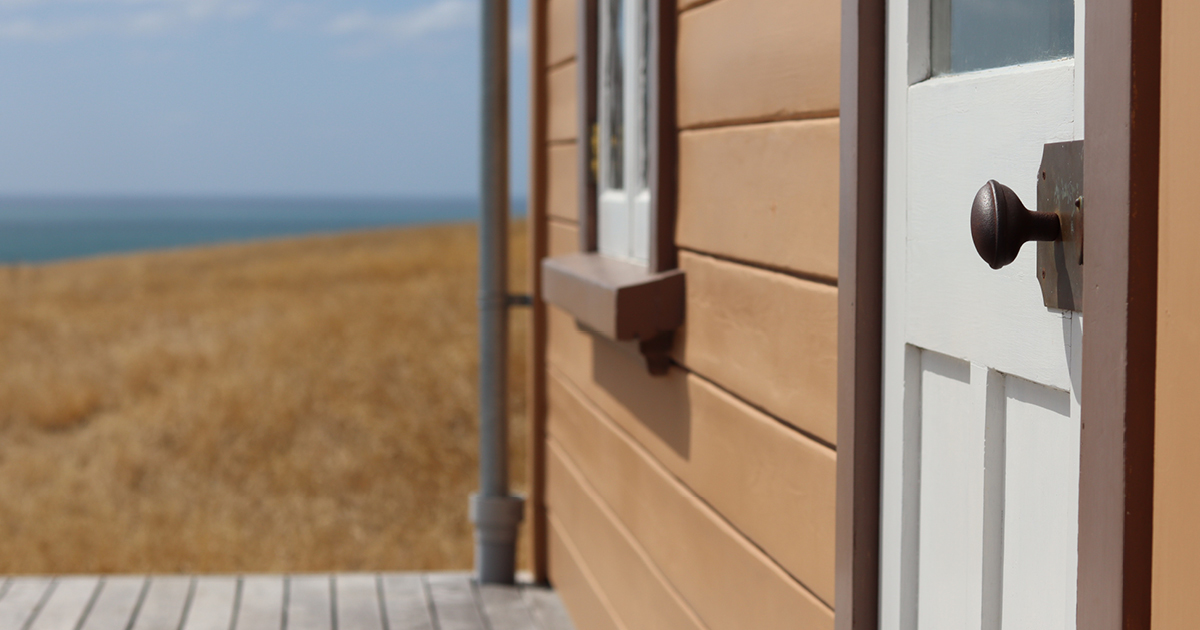 Desperate to save their little, yet significant, piece of Antarctic history – suddenly gridlocked in the dangerous red zone – the Crichtons began a determined battle to see the cabin rescued, relocated, and restored. This meant very generously donating it to the cause. Eventually, they were successful, with the Department of Conservation fronting up the $100,000 needed for the project, which included transportation by crane and truck to its new home: Godley Head, where it sits today. The Crichtons were involved in the decision-making of where the hut would be placed and favoured Godley Head for its proximity to Lyttleton’s port, where the ships set off from during the era of Antarctic explorations. The north-facing outlook from Godley Head is also reminiscent of the view the old cabin enjoyed up at the Crichton’s Sumner property, which honours the connection there.

Now, neatly nestled into its prime location atop the Awaroa hills, spruced up (from its former gravel grey) with a fresh shade of paint – a warm butternut colour – the cabin fits right in with its serene surroundings, while still making its own stamp on the place. We also think the highly durable and odds-defying cabin perfectly embodies Swanndri's “Outdoors Everyday” ethos, as its design and construction, like our clothing, has proven to weather whatever life throws at it. So, next time you find yourself in search of adventure in Christchurch, head to the Port Hills and go as far east as you can. You’ll find a cabin steeped in history, and you may even feel the same spirit of exploration that led to the cabin being built all those years ago. 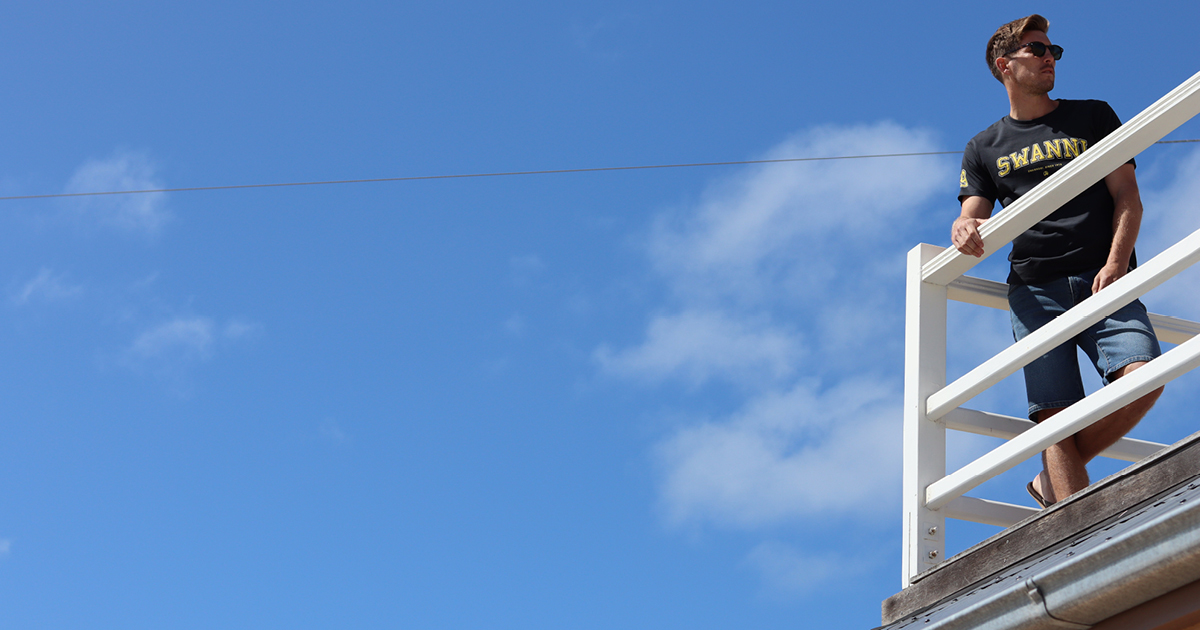